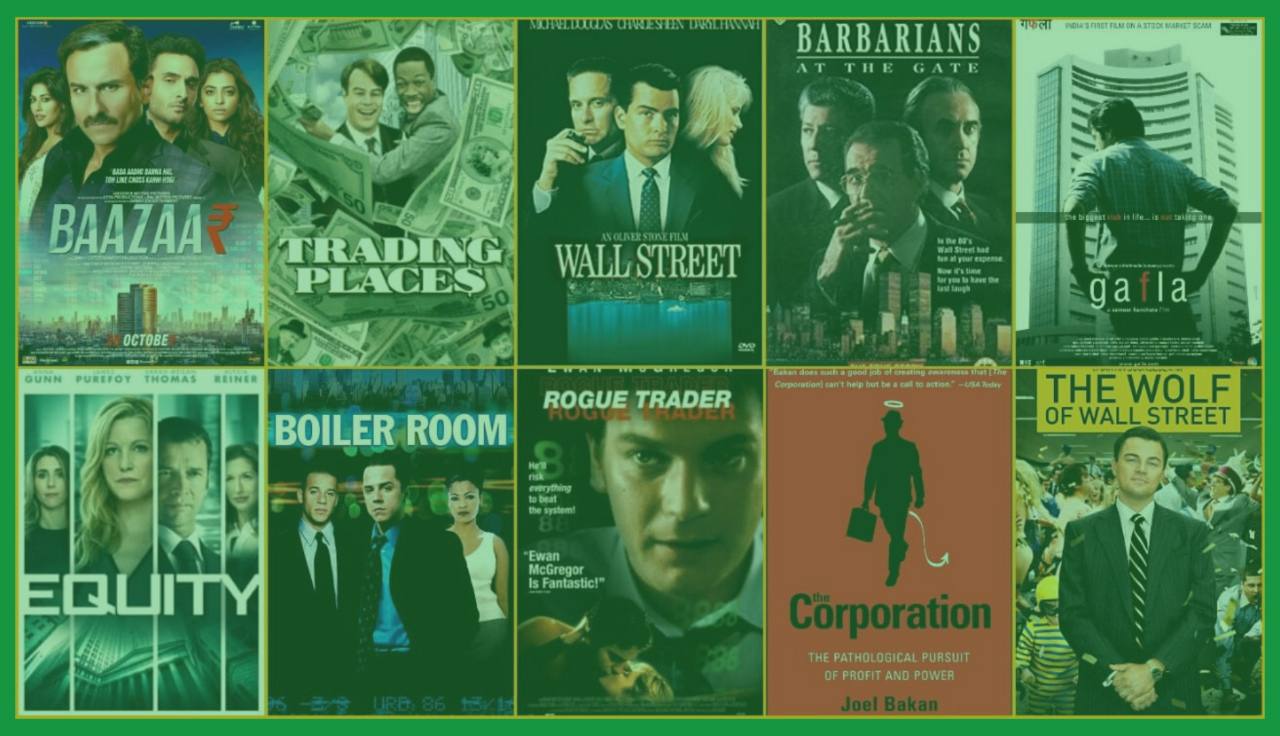 For the first time in the world, millions of people are stuck at home for an undefined period with several hours of additional free time
Binge-watching until the wee hours of the night on Netflix, Amazon Prime and Hotstar has become a favourite time pass of all and sundry. While we all have been consuming content at an unprecedented rate, how about making a playlist of movies that would entice stock market buffs?
We have compiled for you an amazing collection of Hollywood & Bollywood movies on stock market this Quarantine Season that revolve around stock markets.

Here are the best movies on stock market that every finance professional should watch.

Bazaar is the best thriller Indian stock market movie in Hindi about money and power. Allahabad stock trader Rizwan Ahmed arrives in Mumbai by flight. He is determined to work with his “hero”, Gujarati financial maven Shakun Kothar Rizwan bluffs his way into the city’s largest trading firm and manages to convince them to give him a job. He ropes in a high-profile client and with the help of his co-worker and girlfriend Priya Rai he begins a successful career at the firm.

Trading Places is a 1983 best American stock market comedy movie of all time.  It tells the story of an upper-class commodities broker and a homeless street hustler whose lives cross paths when they are unknowingly made part of an elaborate bet. Brothers Randolph and Mortimer Duke own a successful commodities brokerage firm, Duke & Duke Commodity Brokers, in Philadelphia. Holding opposing views on the issue of nature versus nurture, they make a wager and agree to conduct an experiment—switching the lives of two unwitting people at opposite sides of the social hierarchy and observing the results.

Wall Street 2: (Money Never Sleeps) is a 2010 American drama film. In 2008, Gekko is promoting his new book Is Greed Good?, warning about a coming economic downturn. His estranged daughter, Winnie, runs a small, non-profit news website and is dating Jacob Moore, a top trader at Keller Zabel Investments (KZI). Jacob, a protégé of KZI managing director Louis Zabel, has been raising money for Dr. Masters and his fusion research project, which might create abundant clean energy. Jake is also financially assisting his mother, Sylvia, who has quit nursing to speculate in residential real estate.

Wall Street is a 1987 American drama film. The film tells the story of Bud Fox a young stockbroker who becomes involved with Gordon Gekko a wealthy, unscrupulous corporate raider.
In 1985, Bud Fox is a junior stockbroker at Jackson Steinem & Co. in New York City. He wants to work with his hero, Gordon Gekko, a legendary Wall Street player. After calling Gekko’s office 59 days in a row trying to land an appointment, Bud visits Gekko on his birthday with a box of Gekko’s favorite, contraband Cuban cigars. Impressed at his boldness, Gekko grants Bud an interview. Bud pitches him stocks, but Gekko is unimpressed. Desperate, Bud provides him some inside information about Bluestar Airlines, which he has learned in a casual conversation with his father.

Barbarians at the Gate is a 1993 television movie based upon the book by Bryan Burrough and John Helyar, about the leveraged buyout (LBO). Self-made multimillionaire F. Ross Johnson, CEO of RJR Nabisco, decides to take the tobacco and food conglomerate company private in 1988 after receiving advance news of the likely market failure of the company’s smokeless cigarette called Premier, the development of which had been intended to finally boost the company’s stock price.
The film won both the Primetime Emmy Award for Outstanding Television Movie and the Golden Globe for Best Television Movie while James Garner won the Golden Globe for Best Actor in a Miniseries or Movie.

Gafla is a 2006 Hindi share market film inspired from the stock market scam of 1992 which mainly involved Harshad Mehta that rocked the Indian economy and changed lives of thousands forever.

Equity is a 2016 American financial thriller film. Naomi Bishop is a senior investment banker who deals with IPOs. After her latest project is undervalued she faces professional setbacks including clients losing confidence in her work. To bounce back she is hired to handle the IPO for Cachet, a privacy company with a social networking platform.

Boiler Room is a 2000 American crime drama film. In 1999, Seth Davis a 19-year-old Queens College dropout, runs an unlicensed casino in his home near the campus, catering to college students. Although he earns a successful living, he is a disappointment to his father, Marty a New York City federal judge. One night, his cousin Adam stops by the casino to play blackjack, bringing a rich associate named Greg Weinstein along with him. Greg recruits Seth to join J.T. Marlin, a brokerage firm based somewhere off the Long Island Expressway, promising him that he has the opportunity to get rich.

Rogue Trader is a 1999 British biographical drama film. The film centers in the life of former derivatives broker Nick Lesson and the 1995 collapse of Barings Bank. It was based on Lesson’s 1996 book Rogue Trader: How I Brought Down Barings Bank and Shook the Financial World. Rogue Trader tells the true story of Nick Lesson, an employee of Barings Bank who after a successful spell working for the firm’s office in Indonesia is sent to Singapore as General Manager of the Trading Floor on the SIMEX exchange. The movie follows Lesson’s rise as he soon becomes one of Barings’ key traders.

The Corporation is a 2003 Canadian documentary film. The documentary shows the development of the contemporary business corporation, from a legal entity that originated as a government-chartered institution meant to affect specific public functions to the rise of the modern commercial institution entitled to most of the legal rights of a person. The documentary concentrates mostly upon North American corporations, especially those in the United States.

Scam 1992: The Harshad Mehta Story is a SonyLIV Originals Indian share market crime drama web-series in Hindi directed by Hansal Mehta. Based on 1992’s biggest stock market scam committed by Indian stockbroker Harshad Mehta. This web series is taken from journalist Sucheta Dalal and Debashish Basu’s 1993 book The Scam: who won, who Lost, Got Away. Starring Pratik Gandhi, Hemant Kher, Shreya Dhanwanthary and Nikhil Dwivedi, The web series premiered on SonyLIV on 9th Oct 2020. The series is the highest-rated Hindi-language Indian web series now on IMDb with a rating of 9.6 out of 10.