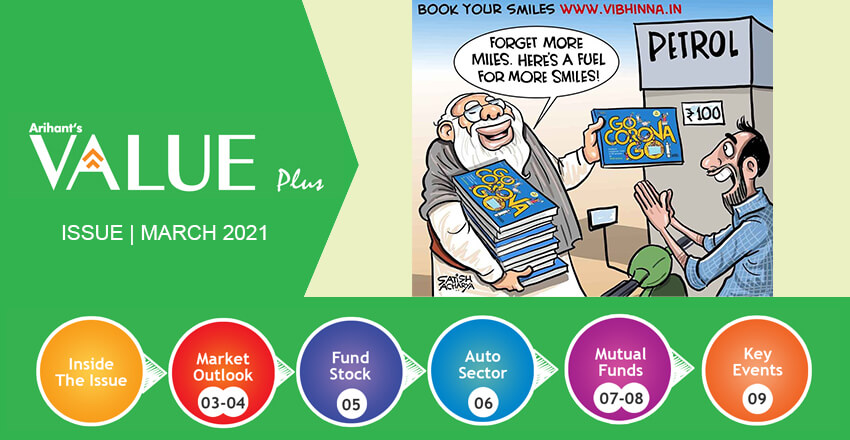 In February 2021, Domestic market moved positively with benchmark Nifty and Sensex Index ending the month with 6.56% & 6.08% profit respectively as compared to depreciation of 2.7% and 3.3% respectively in January 2021. We have seen that the government has shortlisted four banks, which are Bank of Maharashtra, Bank of India, Indian Overseas Bank and the Central Bank of India for divestment after that PSUs Bank shown a good amount of gain and closed the February month with a gain of 22.3%. The broad market has shown positive performance including Nifty Midcap50 rose by 8.2% & Nifty SmallCap 250 increased by 10.1%.

On the sectoral front, Nifty PSU Banks and Nifty Metals have outperformed all other major indices with a strong gain of 22.3% and 18.4% respectively. All other sectors have seen positive momentum in this month. NBFC, Nifty Realty and Nifty Private Banks have shown a positive movement of 2.4%, 7.6% and 2.8% respectively. Comparatively, Nifty Pharma, Nifty Media, Nifty IT, Nifty Auto and Nifty FMCG have shown a negative performance of -1.5%, -4.8%, -2.5%, -0.6% and -3.7% respectively.

The Reserve Bank of India’s (RBI) Monetary Policy Committee (MPC) kept its repo rate unchanged at 4% while maintaining an ‘accommodative stance’ as long as necessary at least through the current financial year to the next year. The RBI governor announced that the decision was taken unanimously and added that the reverse repo rate too was kept unchanged at 3.35 %.The central bank had slashed the repo rate by 115 basis points since late March 2020 to support growth. This is the fourth time in a row that the MPC decided to keep the policy rate unchanged.

On the global front

Global equities returned positive in February 2021, Dow Jones rose by a 3.17%. During the month, Nasdaq index rose substantially by 0.93%, followed by a 2.61% growth in S&P500. Even Nikkei showed an upside of 4.71% and FTSE100 increased by 1.19%. While US 10-year Treasury yields moved higher (+34bps). Across key economies, Covid-19 cases continued to rollover given restrictive lockdown measures. As vaccinations are now well underway in various countries, for this year, supportive fiscal policies should continue (particularly in the US), while global central banks are likely to err on the side of caution, allowing inflation to hover above trend for a while. Wide output gaps may put a lid on inflation. In commodities, gold was down 6.57% in the month of February, while Brent crude was up +18.34%.USD/INR rose 1.43% in the month of February.

We hope you find this issue of Value Plus useful. Please share your feedback on arihant.research@arihantcapital.com