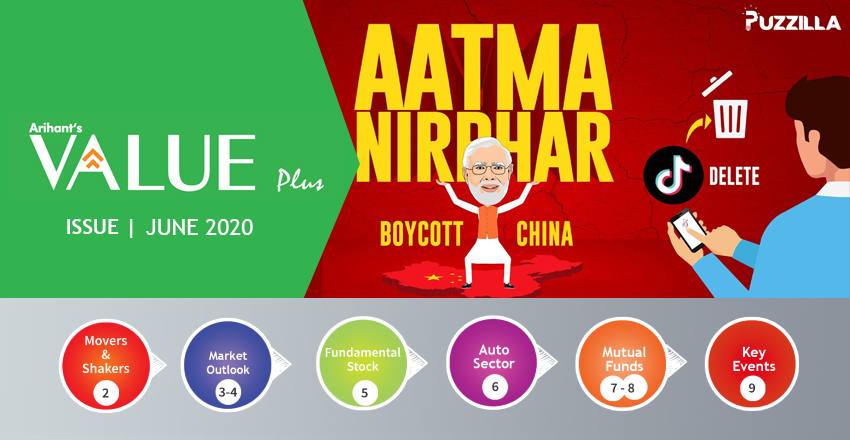 “Atma Nirbhar” is the new mantra not only touted by Prime Minister Narendra Modi, but people across the world. People have learnt the importance of having savings, emergency fund, the need to cut down on debt and only leverage when necessary.

This month’s Value Plus issue shares what happened past month, the market outlook for coming months, has stock recommendations and much more.

Here’s a snippet from Market Roundup, scroll further to download the full issue:

“In May 2020, domestic market ended on a negative note with benchmark Sensex and Nifty Index ending the month with -3.84% & -2.84% respectively. During the end of May month, markets moved higher on hopes that the government would give more relaxations and give states more autonomy in case it imposes the fifth phase of the nationwide lockdown. There was also expectation that government would announce more measures to support the tenuous economy. Whereas in the month of May government announced Rs 20 lakh crore-relief package to help Indian economy to kick-start its slowing engine.

India’s economic growth slumped to 3.1% in the March quarter, the slowest pace in 11 years, even as fresh data suggested the economy may be headed for a major shock in the June quarter. Data released by the statistics department showed GDP grew at 4.2% in the year ended 31 March, compared with 6.1% in the previous year, as private consumption slowed down and investment demand contracted even before the pandemic hit the economy. To add to the government’s woes, India’s fiscal metrics worsened beyond government’s estimates, with the fiscal deficit for FY20 widening to 4.6% of GDP against the finance ministry’s estimate of 3.8% of GDP.”

We hope you find this issue of Value Plus useful. Please share your feedback on research@arihantcapital.com