The Indian equity market ended the week on a stronger note, mainly driven by value-buying in select beaten-down stocks. The Nifty climbed 1.2% for the week to 11,075 while the Sensex rose 1.1% to end the week at 37,385. The highlight of the week has improved the sentiment of the mid-cap and small-cap stocks as investors lapped up select good stocks from the battered mid and small-cap space. Both the midcap and small-cap indices ended higher for the week. Some positive news on the U.S.-China trade deal also helped in reviving the investor sentiment as metal stocks witnessed some relief rally from very oversold levels.

Among sectoral indices, 8 out of the 11 sectoral indices ended in green for the week, led by Nifty PSU Bank Index’s 5.5% gain. On the flipside, due to strengthening of the rupee, Nifty IT Index was the top sectoral loser, down 1.9% for the week. The Indian rupee was the top-performing currency among Asian peers this week, as it appreciated 1.1% against the U.S. dollar to end at 70.92. 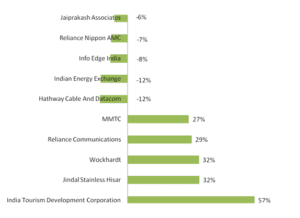 During the week some major data points got released in domestic markets. IIP growth number for July came at 9-month high, while CPI inflation also shot up to 10-month high mainly led by high food prices. While on the global front ECB in its meeting had cut policy rates and revived the QE program to lift sagging growth of the European region. Going forward in next week, WPI inflation data for August will be released on September 16, while in the global arena, FOMC rate decision will be eagerly awaited on September 18.

REQUEST A CALL BACK