From all of us at Arihant Capital, we wish you a Happy Holi, may your lives be colorful and your portfolios green!

In this Weekly Market Newsletter:

Had fun this Holi? So did the global markets. The Russia-Ukraine tensions had eroded almost $12 trillion from global stocks. But, positive cues from the Chinese market and Wall Street coloured all the major indices green. Although all global markets are in the green, most still trade 4-18% below their 200 DMA. Nifty 50 stands closer to its 200 DMA, showing that the Indian markets faced less pressure. Did it have something to do with FinMin’s announcement that India Inc is ready to tackle any external shocks? Were FIIs just waiting for this to start buying in the Indian market again?
See how all major Indian indices went up.

In other news, mercury rises creating demand for summer products, and companies relook at their sustainability goals on world recycling day. Bitcoin crossed 41,000 mark and BSE made history when it crossed the 100 crore mark of registered investor accounts!

The financial year is about to end. Still confused about where to invest? Check out the Do’s and Don’ts of tax saving options in our next blog. Subscribe below and we will let you know as it gets posted.

All sectoral indices went up, but Nifty Financial Services outshined all other indices by topping the list of best-performing sectors, gaining ▲6.21% to close at 17,137. Now let us see how the other sectors performed. 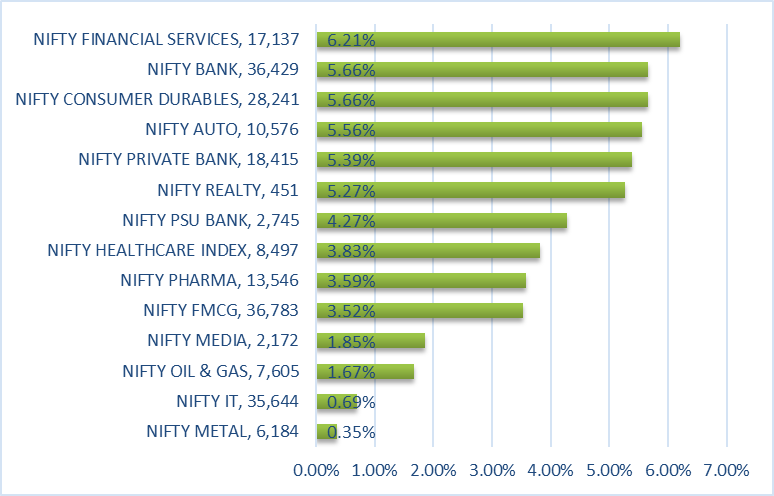 📈What to Expect from the Markets?

India’s stock benchmark indices logged the best week in over a year since Feb’ 21. They were aided by gains in banking, auto and realty stocks, led by U.S. Federal Reserve’s 25bps rate hike in its first bid towards monetary policy normalisation.

Things look much better globally as the impact of the Russia-Ukraine crisis has been limited against earlier fears of the tensions turning into a full-blown war. Rising inflation may impact demand going forward. India is swept with a heatwave causing a rising demand trend in summer stocks, especially in the consumer durables sector.

The daily chart of Nifty closed above 200 SMA and was trading above the downward sloping trendline. On the weekly front, a positive candle is now activated. Together we conclude that stock-specific activity may continue and need to maintain “buy” on deep strategy. If Nifty crosses the 17,350 level it may see a bounce towards 17,500 and 17,750 levels, while on the downside support if it crosses below 17,100 then it can test the levels of 16,800 and 16,650

The daily chart of Bank Nifty is still trading below 200 SMA. On the weekly chart, the index has shown positive formation. If both the data are combined and analysed then Bank Nifty may perform after consolidation. This week Bank Nifty futures closed at 36,400 levels. In the coming trading session if it holds below 36,100 then weakness could take it to 35,500 and 35,200 whereas minor resistance on the upside is capped around 37,200-37,500 levels.

Whirlpool stock can be added at CMP of 1,652 in tranches to the portfolio. Heatwave is very strong and demand for key products like air conditioners and refrigerators is expected to be strong as per channel checks. Dealer level inventories are at lower levels currently. This is a positive sign for the industry which has been impacted by slowdown and inflationary push.

We are valuing the stock at 45x FY24 EPS of ₹51 and arrived at a price objective of ₹2,301 in the next 12 months. Financials have done great in the last few days as per expectations. We maintain a positive outlook on them, however, some profits can be booked at higher levels.

Rational: Stock has regained 20 days moving average with decent volume and has turned from the oversold territory on the weekly chart.

Technical setup: Chambal Fertilizer counter has closed above all its moving averages and has formed trough on its upward sloping trendline support with decent volume after three days downside move. Leading indicator 56 is showing added power to move up.

The production-linked incentive (PLI) scheme for the automobile and auto component industry in India has attracted a proposed investment of ₹74,850 crore. The target estimate for the investment was ₹42,500 crore over a period of five years. Maruti Suzuki, Hero MotoCorp, Lucas-TVS, Tata Cummins among 75 cos to get sops.

How to recover your home loan interest with a SIP

Should you invest in Sovereign Gold Bond Schemes?