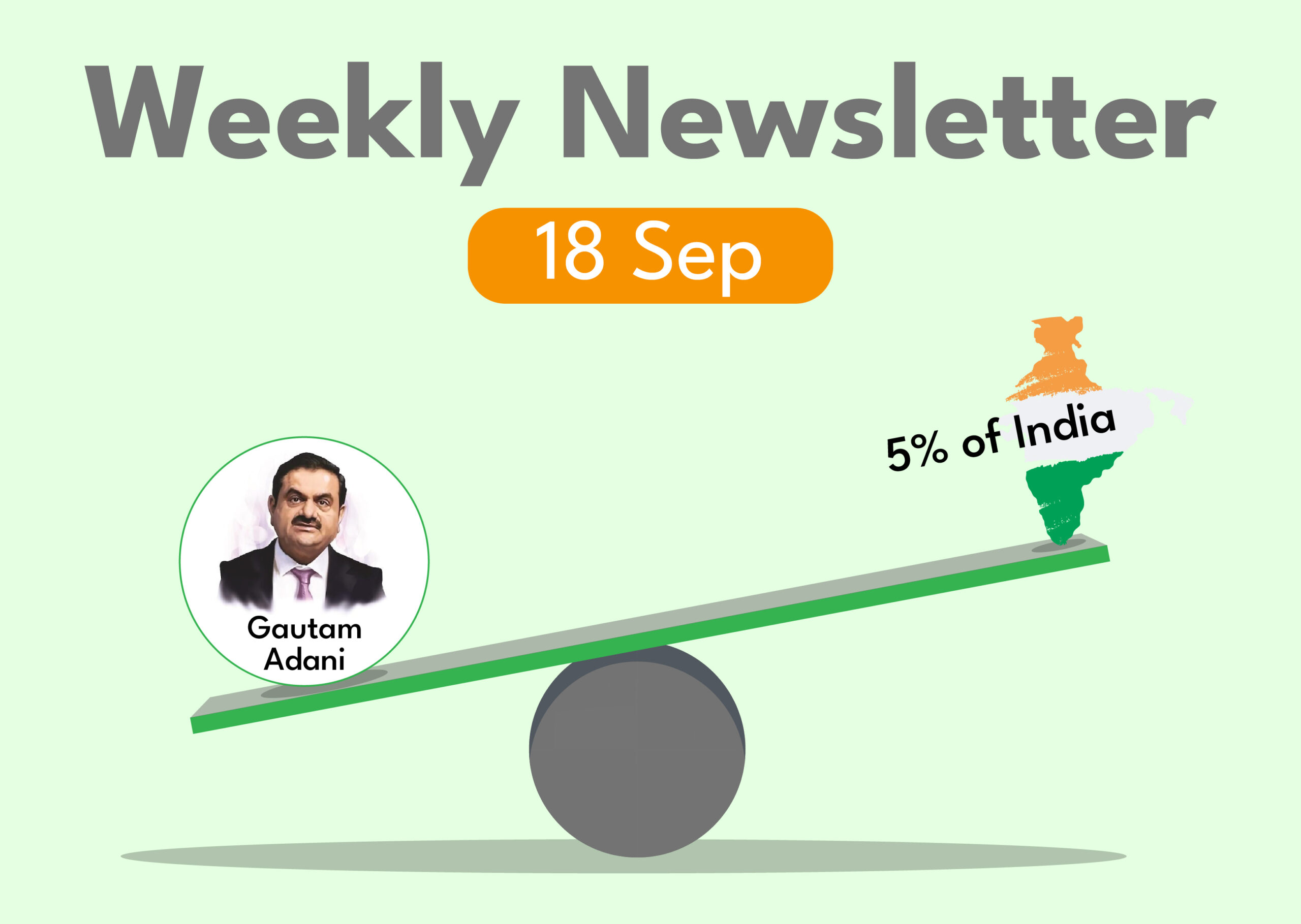 No time to catch up with news of the weekly market? We’ve got you. Catch up with all the latest in the stock markets in 6 minutes. Lets get started and see what caught our eye last week:

In the stock markets, victory can be fleeting, and no one felt it more than Gautam Adani. Gautam Adani’s acquisition of Ambuja and ACC Cements was marked by another big milestone: he surpassed Amazon’s Jeff Bezos to become the world’s second richest man. But, it seems his luck was fleeting, as panic struck D-street and caused a selloff in the markets (and of course, Adani shares). This paved the way for LVMH’s founders Bernard Arnault and family to take the second spot.

Time for a pride walk? Not so soon. At $155 billion, Adani’s net worth is 4.9% of India’s GDP of $3.2 trillion. Think about this for a second. 5% of India’s wealth is in the hands of this one person. To put this in perspective, if we add the net worth of the biggies: Elon Musk, Jeff Bezos, Bill Gates and Mark Zuckerberg it is still less than 3% of the US GDP. Add to this the fact, that India’s population is larger than that of the US. This speaks volumes about the huge disparity and concentration of wealth in India.

But why was there a sell-off in D-Street? The US inflation numbers came higher than expected, leading analysts to claim that there is no chance that Powell will pause on the rate hike. Global markets witnessed a correction with investors fearing that an aggressive hike to slow down growth and would lead to higher unemployment.

India’s stock market closed on a negative momentum led by losses in IT followed by Auto, Realty, Oil & Gas and Energy stocks. This is the worst week for the market in three months after it saw a sharp fall on Friday.

If we look at the daily chart of Nifty there is a negative divergence on the RSI indicator as well as the candlestick chart shows “Downward Gap Area”. On the weekly chart, Nifty traded above its upper trendline support levels. It seems that market may face some resistance at higher levels but buy on dip strategy will perform well in such market. Nifty can face resistance around 17,650 level, on breaching this, it can touch 17,880-18,050 levels, while on the downside support is 17,450 if it starts to fall further then it can test 17,300 and 17,150 levels.

If we look at the daily chart of Bank Nifty we observe a “Doji” candlestick pattern formation. On the weekly chart  we observe a “Spinning Top” candlestick formation If we analyze and combine both the data then it seems that market may face some resistance at higher levels but Bank Nifty may outperform Nifty. In the coming trading session if it breaches 41,150 then it can touch 41,500 and 42,000 levels, however downside support comes at 40,650 below that we can see 40,200-39,500 levels.

Indian markets are expected to be stock specific . We continue to remain positive on travel, hotels, auto-ancillaries space. Indigo can be a good bet for portfolio.