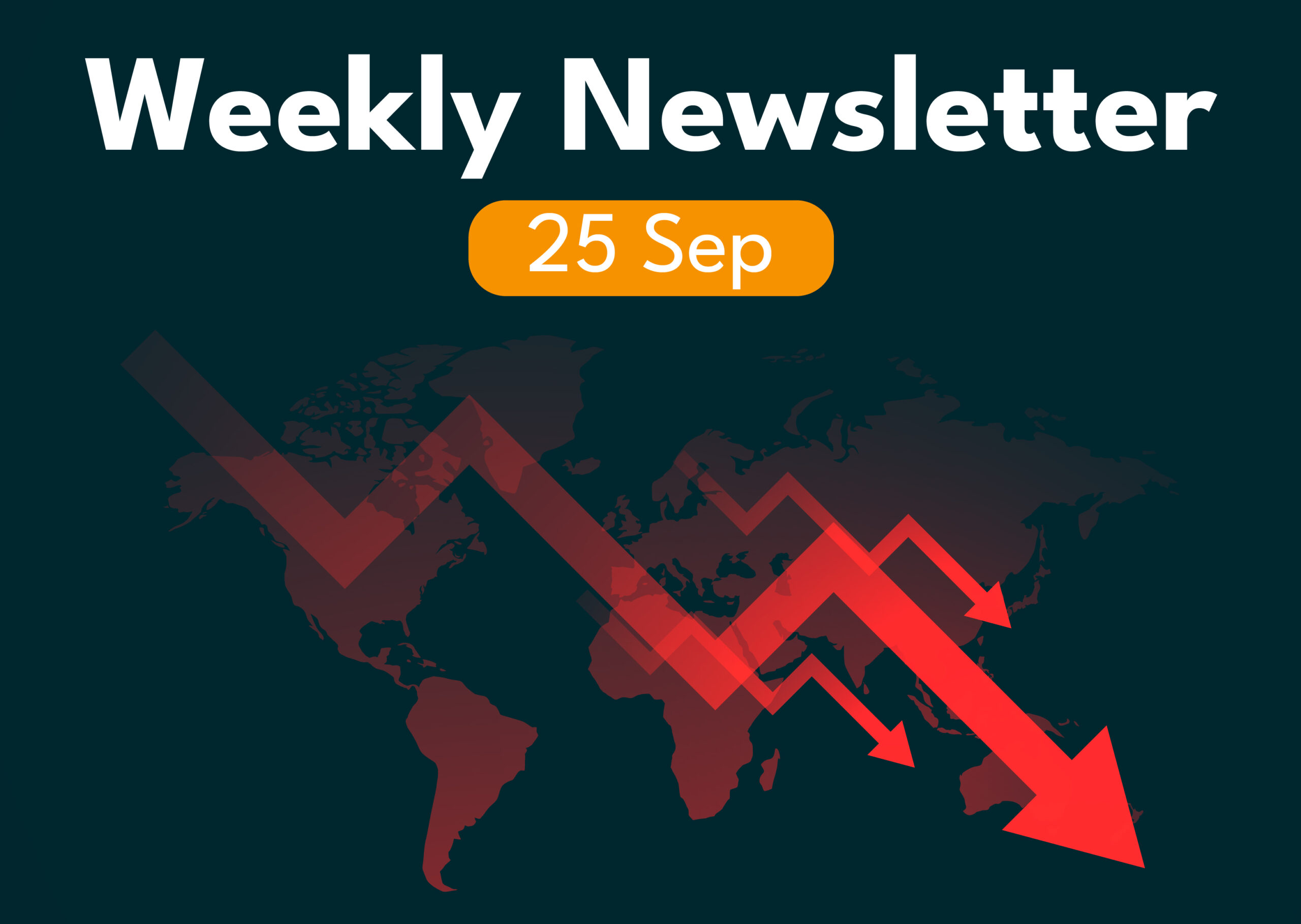 6 days in 6 minutes Weekly Market Wrap-up. Catch up on all that’s trending in the last week and get ready for the Monday markets with insights from our expert research team.

This was an extremely eventful week, but let’s be honest, it wasn’t great. Before we get on with the doom and gloom here is a song to help you remain in cheerful spirits this Monday.

Alright, let’s get started- the markets last week were not coloured gulabi but red. Why you ask? With so many global events bearing heavily on them, we are hard-pressed to choose one.

Bank of England announced that the UK economy is already in a recession, and the residents who are already burdened with the cruellest inflation in 40 years(9.9%) will now also bear the burden of 2.25% interest rates (the highest in 14 years).

Powell announced a hawkish 75 bps hike and forecasted further tightening before the year-end. He is clearly signalling that recession may be the price they are willing to pay for crushing inflation.

Despite the turmoil in the US, the Rupee sank to an all-time low of 81 against the greenback (US dollar). RBI who has already spent a mammoth 80 Billion from its forex kitty, will be announcing its monetary policy soon. Analysts have already begun to predict up to a 50bps hike.

Putin decides to escalate war efforts on Ukraine. The death of a woman in Iran sparked a nationwide protest over the Hijab ban.

Xi in a soup? Or is it a coup? Rumours abound: Chinese Prime Minister Xi Jinpeng seems to be under house arrest amid a military coup. Let us see if this week will tell us what’s really happening in China.

India’s stock market closed in a negative momentum after Federal Reserve announced a 75bps rate hike and provided hawkish commentary. Realty, PSU Banks, Banking, and Metal stocks decline while FMCG, Healthcare and Pharma indices rose in a volatile week. Liquidity tightening and recession conversations abound, and layoffs have started in the US- especially in the financial sector.

We believe that out of the FII inflows in India, only 15-20% are India-specific. The Indian economy decoupling from the global markets will not remain in focus after a certain time in the backdrop of global losses. India’s premium is still 4% higher than that of the global economy and its valuation is substantially higher than its peers. We would advise investors to be cautious while investing as popularism would be back on the backdrop of elections in 2024.  While investing, investors should look for a mix of value and growth. We continue to maintain higher cash allocation to portfolios currently.

Indian rural sales are expected to pick up and their growth would determine India’s outperformance. We are recommending safeguarding your stocks and avoiding long-term stories at a premium.

On the daily chart of Nifty, we observe a negative divergence on the RSI indicator as well as the formation of a Bearish candlestick pattern. On the weekly chart, the Shooting Star candlestick formation is visible, and the market may face some resistance at higher levels. Nifty can face resistance around 17,500 levels if beyond which it can touch 17,650-17,800 levels. On the downside, support is 17,200, upon breaching this, it can test 17,050 and 16,800 levels.

The daily chart of Bank Nifty shows a Bearish Candlestick pattern formation. On the weekly chart, we observe a negative RSI divergence.  It seems that the market may face some resistance at higher levels. In the coming trading session if it trades above 39,800 then it can touch 40,100 and 40,500 levels, however, the downside support comes at 39,450 below that we can see 39,200-38,800 levels.