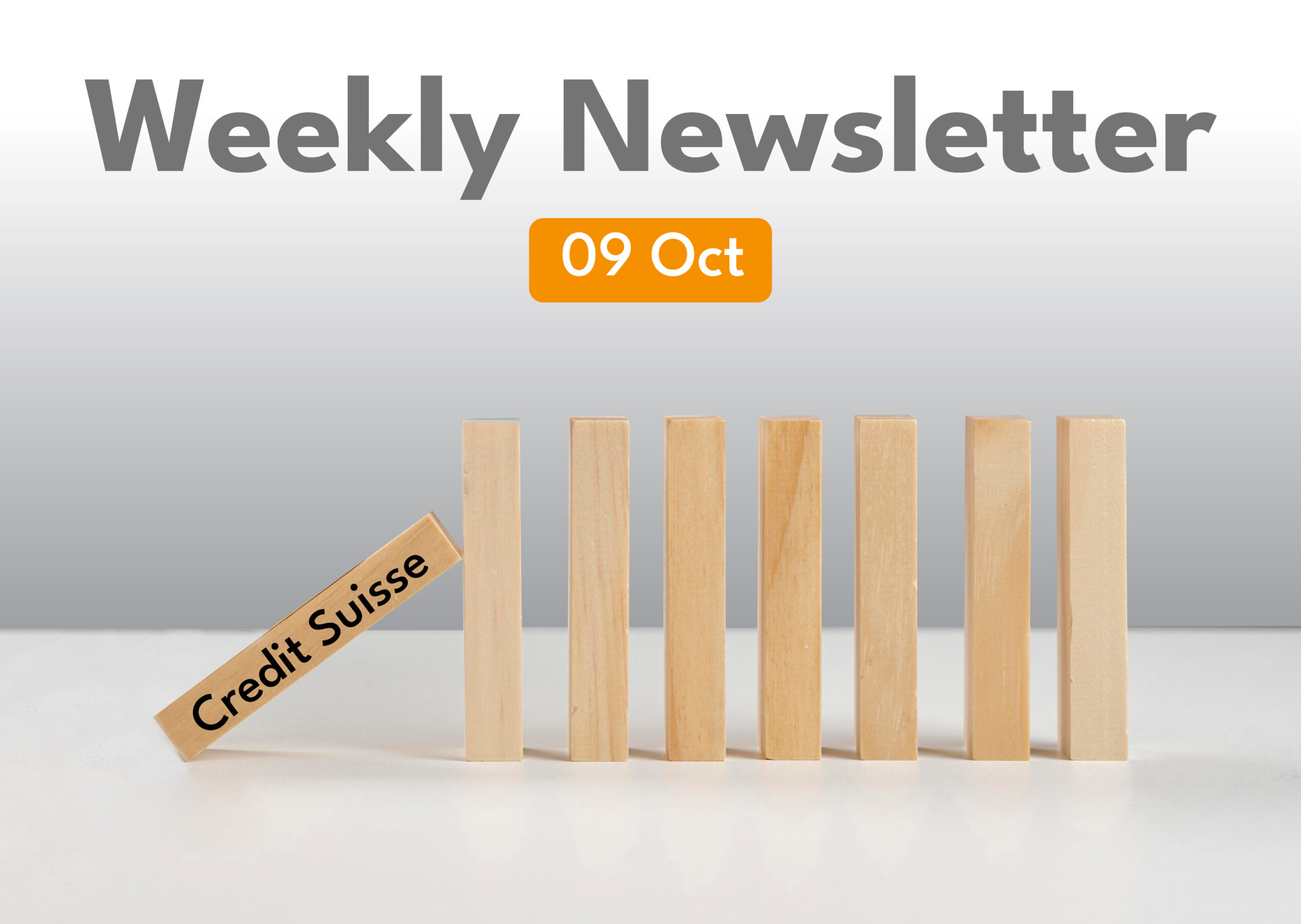 Tracxn Technologies Limited IPO is live now. Should you invest?

Get the latest stock market updates. Catch up on all that’s trending in the last week and get ready for the Monday markets with insights and stock recommendations from our expert research team.

🎧Tune in to this song: Skyfall as you read our weekend newsletter wrapping up the key events of the week.

CDS are in the news again – and suddenly back at the forefront of the global financial markets. This time it’s not Lehman but Credit Suisse who is bringing CDS to the front pages. Credit Suisse is in considerable financial distress: its share price is dropping to record lows, and CDS rates are skyrocketing. The question now is whether Credit Suisse will create a domino effect leading to a collapse of the entire global banking system?

Now if you aren’t a pro in the 2008 financial crisis, let’s tell you what CDS are and why they matter. Credit Default Swaps are financial instruments, which transfer risk from one party to another in exchange for a premium, just like insurance. The higher the risk associated with the CDS, the higher the premium. So, the people who lend money to any institution, always face a risk that the institution may fail to repay them. These lenders often enter a contract with another investor who will pay them in case of a default. These investors charge a premium for taking up this risk. In the case of Credit Suisse, the investors now think that the possibility of Credit Suisse paying up on their debt, is pretty low so the CDS premium is rising up substantially. Even the markets are losing confidence in it, so the stock prices hit an all-time low last week. Even though the company offered to buy back billions of its debt to show the strength of its books, the markets still wonder if the bank can sustain itself? Or will it lead to a collapse of the entire banking system and yet another financial crisis?

Heading East, OPEC+ announces the biggest cut in oil production since the Covid-19 pandemic. This move will reduce about 2% of global oil demand, and lead to an increase in crude oil prices. This is further bad news for India, whose Rupee has already touched an all-time low of 82, and has spent over $100 billion to save the Rupee’s freefall.

Read on for more news on EVs and stocks in the news of the week.

Coming to D-Street, the markets remained choppy, this week Nifty, Sensex and Bank Nifty were all closed in the green despite volatilities during the week. A good strategy to make money in such markets is to stay invested for the long term and keep topping and nibbling away every time there is a correction.

The stock markets closed with a positive momentum aided by information technology, metal, realty, media, and pharma stocks. This happened amid a surge in oil prices following the OPEC+ bloc’s decision to cut supply in a bid to arrest the slide in oil prices.

We observe Doji candlestick formation on the daily chart of Nifty. On the weekly chart, we observe the prices have tested the downward gap area. It seems that the market may face some resistance at higher levels, and we may see some consolidation. Nifty can face resistance around the 17,350 level if it starts to trade above then it can touch 17,480-17,600 levels, while on the downside, support is 17,200 if it starts to trade below then it can test 17,050 and 16,800 levels.

On the daily & weekly chart of Bank Nifty, we observe the Doji Candlestick pattern formation. It seems that Bank Nifty may also face some resistance at higher levels. In the coming trading session if it trades above 39,500 then it can touch 39,800 and 40,100 levels, however, downside support comes at 39,100 below that we can see 38,500-38,200 levels.

Thomas cook looks interesting at current levels. We have recommended this stock earlier as well. So, we maintain a buy on this stock with a price objective of ₹100.

Tracxn Technologies Limited IPO is live now. Should you invest?